The Gea Globes Collection features a range of classic style furniture that has globe bars and world globes with current political world maps. It consists of globes and bar globes which are as elegant and breathtaking as timeless antique replicas, while the current world globes themselves feature updated political geographical maps. 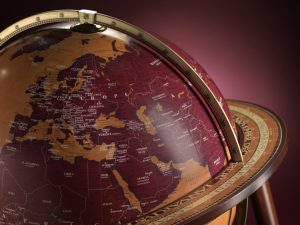 The world globes and globe bars in the Gea Globes Collection all feature Zoffoli’s signature rich colors, burgundy and ochre that feel most at home when they are in a classic setting. Those who walk up to take a closer look will probably expect the globe map to be classic too, a reproduction of eras gone by, but they will be surprised to see that Gea globes all have contemporary political maps, in contrast to the classic feel of the mounts they rest on. 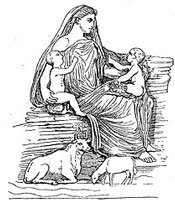 Gaia, Gea in Italian, is a personification of the Earth. Image of Gaia Kourotrophos from book of Roscher printed 1884

Gea is known as Gaia in English. In Greek mythology, Gaia is the personification of the Earth and one of the Greek primordial deities. Gaia is the ancestral mother of all life: the primal Mother Earth goddess. She is the immediate parent of Uranus (the sky), from whose sexual union she bore the Titans (themselves parents of many of the Olympian gods) and the Giants, and of Pontus (the sea), from whose union she bore the primordial sea gods. Her equivalent in the Roman pantheon was Terra.

“Charm is the element of distinction of our products … Sacrifice and hard work are key elements … But nothing can be achieved without a sense of passion. It is this combination that makes our products unique.” Zoffoli, 2011

According to the Greek myth, Gea is the divinity at the origin of the world, the primordial goddess of the Earth and the original substance from which all things come to life. The collection Gea attempts to recall these origins in its own models. With its basic and clean shapes, its ochre and burgundy colors, and its fine quality materials, it will be simple to decorate any room with style and a touch of classicism.

As a matter of fact, the warm colors of the world globe and the classic vintage style of the furniture give the Gea globes an antique look, but the cartography has been updated, ensuring that Gea current world globes will perfectly fit in any environment as both decor and a reference and educational tool.

“Generation after generation memories and suggestions are handed down making our products richer and full of charm.” — Zoffoli